Easter camps a bundle of fun

More than three hundred youngsters participated in the Club’s Easter camps.  Despite the inclement weather, great fun was had by all as reflected in the sample of photographs below.  Jonney Sadleir and his crew of helpers ensured that there was plenty of activity both indoors and outdoors.

Flying the flag down under

On a recent visit to his daughter in New Zealand, Clanns Executive Committee member, Michael O’Kane, bumped into former club player, Shay MacLeod, who was still proudly sporting the club colours.  Michael had made a boat trip to an offshore island called Waiheke and, while there on Palm Beach – as far away from Clanna Gael Fontenoy as you’re likely to get – he spotted the club jersey and its proud wearer.  A former member of the club juvenile section, Shay played in midfield with distinction for his team.  Though he has since moved to Waiheke from Donnybrook with his parents and two brothers, he still misses his Gaelic football big time.  Perhaps we can look forward to his return to action for the Club some fine day! 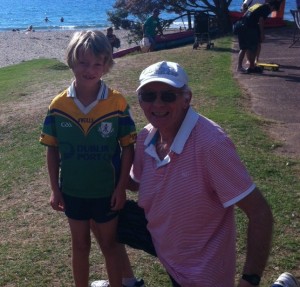 win over Na Fianna this weekend.  With the minimum twelve players allowed at this level and missing a number of key players, the team put in a powerful performance against an opposition which in truth surpassed them in certain skills aspects of the game.  But what Clanns lacked in the skills stakes they made up aplenty in the manner in which they hounded the opposition and prevented them from establishing any firm rhythm to their play.  That said, they showed enough skill of their own at key stages of the match during which Conor Pugh registered three fine goals while Paddy McNamara, Scott Collopy, Conor Rimmer, Ciaran Hendrick and Cian O’Regan also contributed handsomely to the scoring.  Ruairi Corrigan had a particularly fine game in the last line of defence.

That’s three wins out of three and a top of table position for the team.  Greater focus in training on the drills for skills development and there’s no telling how far this team could go!

Make this a Family Day out to have fun and raise funds for the Club.

Includes chip timing for all 5k runners, joggers and walkers

The Club notes with sadness the recent death of Sean (Seanie) Connolly, brother of Shay Connolly  (Club Manager) and uncle of Cormac Connolly (senior hurler).  Sean himself played hurling and football with distinction for the club up to the U-16 level.  Ar dheis Dé go raibh a anam dilis.

The following numbers drawn on the 25th March did not produce a winner:

However, €20 was won by each of the following: Jacquiline McDermott, Ann and Amy Doyle, Siobhan Bolger, Sarah McCarthy, Stephen and Colleen.

To support the Club Lotto, just pick any five numbers which are then eligible for all three jackpot draws.  Plus there are 5 x €20.00 winners drawn weekly.  It costs just €2.00 per ticket weekly.  Or you can play by standing order through your bank if you so wish – contact Jay Byrne at 086-8870376 for details.

The Gaelic for Girls programme gets underway at the Club on Monday 22nd April.  Running for eight weeks at a cost of just €1 per weekly session, it is especially designed for girls, aged 8-14, who are new to the game.  So all are welcome

Best wishes to Club member, player and trainer – Ciaran Murphy – on his recent marriage.  Ciaran and his bride, Aine, are currently on their honeymoon.