U16 Footballers lift the Cup

Our U-16 footballers did themselves and the Club proud in winning the ‘C’ Championship Final in Parnell Park on Saturday 25th May, doing so with considerable style and passion.  The lads had prepared well and were ready to take on a strong St Patrick’s side from Donabate.  Winning the toss, St Patrick’s opted to play with the wind (strong) in the first half and they took the lead with two well-taken points. Clanns started to work some chances and scored three points on the bounce (Ross).  The work rate of our midfield duo – Aran and Jonathan – was brilliant throughout the game.  This team has developed a habit of pushing on in the middle 10-minute period of each half; and sure enough on the 19th minute scored an amazing goal. In fairness to the opposition they stood up and scored a goal and point of their own to level the game at halftime at 1-3 apiece.  Clanns had played well against a strong wind and thus were confident going into the second half – especially after one of Colly’s special team talks. 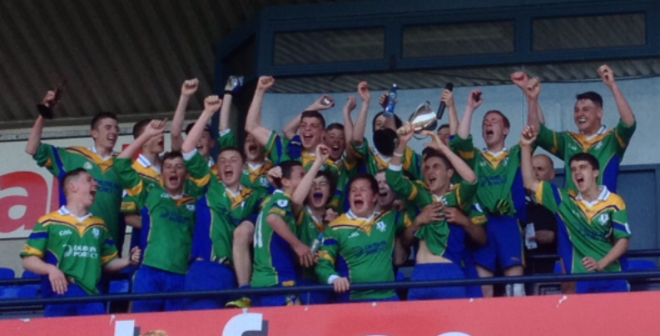 The second half kicked off with a well-worked score finished by Gary. This was followed by a further two points only for St Patrick’s to respond with a point and a goal. The match was truly in the balance and could have gone either way. Both sides were tiring and the game was bubbling up. Hats off to our defence of Theo, Sean, Sean R, Eric, David and Aaron (Monty) for the steel they showed throughout the game; while our half-forward line of Dean T, Tom G and Tomo W set the groundwork for a lot of our scores. Then came the second Clanns goal, courtesy of Tomo who smashed into the net to send our supporters wild. What followed was a great exhibition of football, both teams traded scores and with eight minutes to go the game was level once again at 2-7 each. But our lead was restored and the smallest man on the pitch (Glen) scored a key point to provide a two-point advantage with just four minutes remaining.
Although St Patrick’s pushed hard to the very end, Clanns reached the final whistle with a three-point cushion and the players celebrated with the same passion they had displayed on the field.A big thank you is due to the Clanns army of travelling supporters, to the coaches – Jonney, Colly and Ray– and to the players themselves of course.