A wonderful series of performances over this weekend saw our U-14s footballers win the Division 4 Feile.  A draw in the opening game against a very fancied St Margarets side was followed by a loss to the host club Thomas Davis – who went on to deservedly top that qualifying group.  But the Clanns lads picked themselves up tremendously to defeat a strong Ballyboden St Endas side in their last qualifying game by such a margin as to take them through to the semi final stages.  The long trek from Tallaght to Swords was followed by an even more impressive win in that semi final over Fingallians who had topped the other qualifying group.  The brand of football played by the boys in that game was a sight to behold.  So onto the final the next day against Kilmacud Crokes at Peregrines GAA Club – with the supporters club growing by the hour.  The squad produced yet another performance that every parent and coach is proud of – wonderful free-flowing football when in attack, determined dogged play when in defence.  The final whistle saw Clanns two points to the good and most deserving champions on a scoreline of 3-7 to 4-2.  Congratulations to all involved – players, parents and the team mentors with the ever-resourceful and totally-devoted Roger and Felix at the helm. 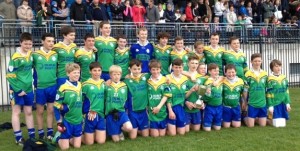