U-10 hurlers hit the road

U-10 hurlers hit the road
The U-10s started the new season with a great trip by 22 of them to Carlow for the annual Leinster U-10 hurling blitz at Carlow Town hurling club. In all 32 teams participated including our boys who were split into two evenly matched teams.

The lads played Naas , Skerries Harps, Ballinamere, Durrow, Camross and Kilmacow (both Co Kilkenny). All in all they did well, winning around half their games. The hurling was of a really good standard and a few outstanding performances from several of the lads gives a lot of hope for the season ahead. Of course the bus trip itself and the food at the end were among the highlights! 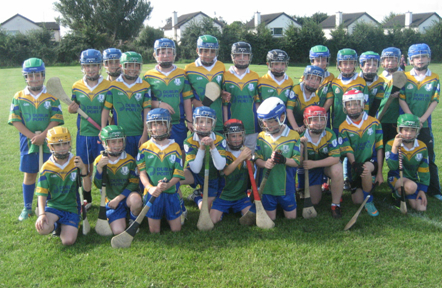 They then played in the quarter final against Wolf Tones Derrymacash of Co Armagh, unfortunately losing out in the second half.  Every one of the players displayed great heart and attitude, gave it their best and had a great experience on the day: Lochlan , JP , Luke , Daniel , Liam , James , Jonathan , Hugh , Killian  and Hugh . And well done to Clann na Gael in Lurgan for hosting a terrific event.