2013’s Easter Camp promised to be a good one with the Club running two separate weeks of Hurling/Camogie and Gaelic football for Boys and Girls, The dates were set, the coaches were ready to go, the kids had signed up all 195 for week one all that we were relying on was the weather.!

As you might recall the snow and freezing cold weather that fell on the first week of the Easter holidays meant the majority of activity for the week was indoors, by the last day the sun began to appear and we seen the last of the snow blizzards, this gave us hope for the second week.

To go from frost bite to sun burn in the space of two weeks is something that nobody could have predicted  week two of the camp although lower numbers than week one was a great success as we got to run the Skills competitions,  Coaches V Kids and most importantly the Football & Hurling blitz between age groups.

Summer Camps are only around the corner more information to follow. 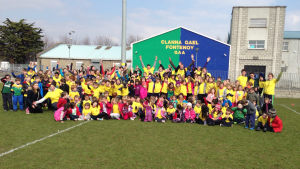