Footballing the U-9 way

The boys came out the wrong side of an exciting and high scoring match with Templeogue Synge Street.  We started really well with Emmet and Senan H controlling midfield and sending in good ball to the forwards.  Matthew had a great half up front, winning lots of ball and scoring four excellent points.  Good defensive work from Eoin and Hugh kept the pressure on Templeogue throughout.  Two points apiece from Emmet and Senan H and a great long range effort from Ethan put Clanns six points up at half time.  A new formation in the second saw Eoin move up front and he did really well to score two fine points under pressure; he also set up Hugh with a nice pass for his well-taken point.  Finn battled hard up front and was unlucky not to score, while in defence Senan T and Alec both marked tightly and cleared their lines well.  However, Templeogue got on top in midfield and rattled off six points in quick succession.  Our lads responded with a goal and a block but we put three good point scoring opportunities just wide to leave Templeogue holding on for the win. 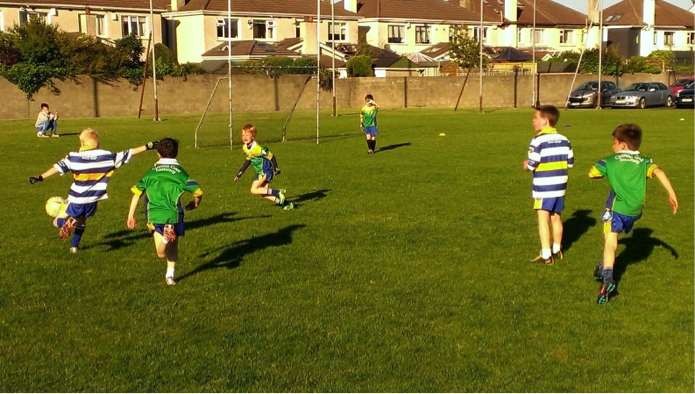 The U-9 defence holds the line well against Templeogue

In their last outing the footballers hosted St Marys from Saggart, fielding two teams to help produce games of an excellent quality.  This is in no small part due to a change in recent weeks to the training schedule.  By now training at 18.00hrs on a Thursday this allows more parents/coaches to attend.  In addition, the structure of the training has been changed whereby the focus is now primarily on skills training with much more attention paid to discipline within the training schedule.  Also, downplaying any suggestion of a game during the training routine – which tends to distract the children from the skills element – is having very positive effects on performance on the Saturday morning in both hurling and football. Dramatic improvement in the skills of the developing players is plain to see and it has been great to see the benefits to the team culture of all the children progressing and enjoying the games as a result.

The U-8 hurlers put in another fine performance last Saturday against Bray Emmets.  As the opposition was slightly down in numbers we loaned them a couple of the Clanns boys who in their own right put in good performances – some might say too good!  It was clear to see the benefits on the pitch arising from a change in the structure of training since the previous Wednesday.  Winning three out of four matches, it is hard to pick out any individuals in particular for praise, but at a push mention must be made of Zaza, Max, Jack, Mossey and Finn.

On a side note it was great to see Jack Flanagan and Thomas Charles step up a level to play their third game of the day by lining out for the U-9s.  They proved to all that next year will be no problem in making the transition to the higher grade.

Hurling their way to the top

Another good team performance and another fine victory sees the U-13 hurlers continuing to share top spot in Division 4.  With seven wins out of seven to their name, the latest over St Peregrines in Sean Moore Park, this team is producing the results that match the fine hurling evident on the pitch.  This was never more evident than in the great hook by defender, Matthew O’ Rourke, to prevent a certain goal. Clanns led in this game from start to finish and were comfortably in the lead at half time by 2-3 to no score.

The visitors took advantage of the wind in their backs to come more into the game in the second half and put two goals past our defence, but otherwise the backs stood up very well and up the field our players continued to rack up the points.  As always with Peregrines, the game was played in the best of spirits throughout.  Short a number of our regular U-13s, the team was once again fortunate to be able to call on the services of Karl Morgan, Colm O’Briain and Seamus McCann from the U-12s as well as Cian Morgan from the U-11 squad – all of whom acquitted themselves extremely well. 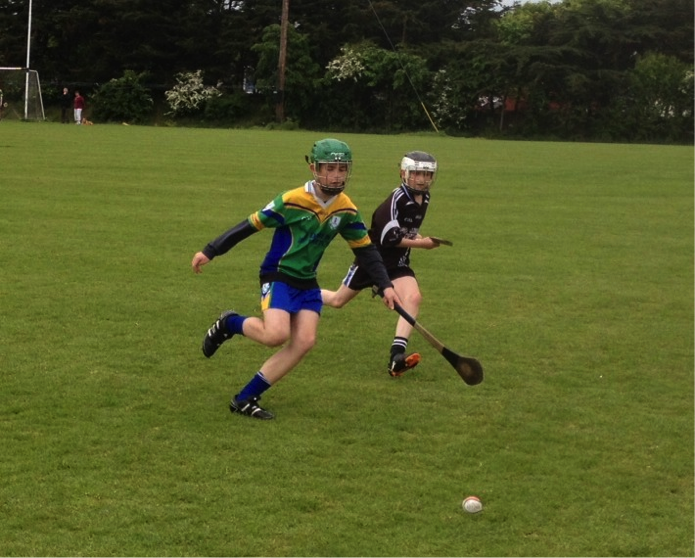 First to the ball – yet again

U-9 hurlers sparkle in the sunshine

The Clanns boys were determined to try win against difficult rivals from the start and matched the visiting Westmanstown opposition in ground skills for the first 10 minutes of this game. The possession moved from one end of the field to the other with Thomas defending strongly as always and Hugh’s speed and quick doubling on moving balls putting pressure on the opposition keeper.  Some great work by Aidan in midfield managed to deliver the ideal fast ball to Dylan and Hugh who struck our first goal. Despite receiving an early hand injury Alec saved and cleared balls out of the danger area and Eoin and Thomas won 50:50 balls against the bigger and taller hurlers.  Alec made a number of great saves and was unlucky that a surprise long puck out, which he managed to block and save, rebounded over the bar to give the visitors three points. Eoin replied with some long puck outs and secured three points after one bounced straight over the bar. Unfortunately two long shots from Westmanstown gave them two points and left the score at 11 points to 4 at half time. 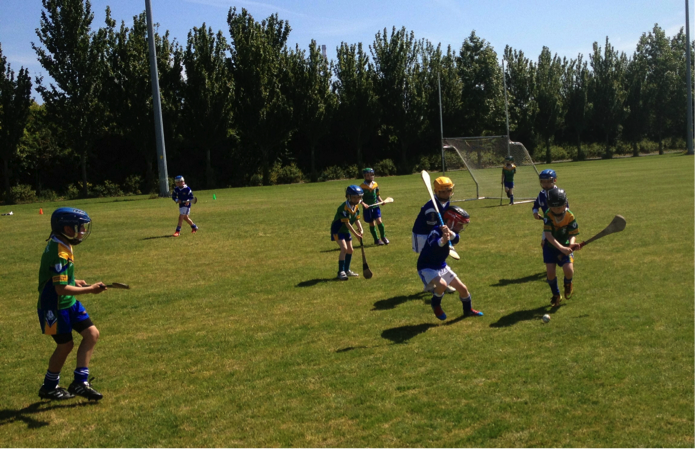 In the second half Jonathan’s arrival changed things for us. He made a number of great saves, cleared his lines well and delivered good puck outs. Alec was now able to battle hard in midfield, with Aidan picking moving balls and striking cleanly out of his hands up to the forwards. Dylan showed he could win 50:50 possession even when outnumbered and delivered fast balls from midfield into attack. A goal each for both sides in the second half left the final score at 12 points to 5 with an overall victory for Westmanstown but a great second half from our lads. During the ground hurling periods Clanns were every bit as good as their opponents despite the difference in size.

The second game was a strongly contested affair. We took three of the U- 8s who had just finished two long games in the sun but they were still able to hold their own against the Westmanstown team. In a low scoring game, it was 1-1 until the final minutes when the opposition goal keeper scored from a puck-out to decide matters, but we had several opportunities to make more of the game. Senan had a strong game in goal making several excellent saves, assisted by Padraig and Adam. Thomas (U8) had a superb game marshalling from midfield and had several long range efforts. Jack (U8) also had a great game and scored our goal. Mark did well in goal in the second half and cleared his lines well, while Matthew won a lot of possession up front and narrowly missed putting it between the posts on three occasions. Our lesson for next week will be picking the sliotar on the move, as that could have been the difference between the teams. 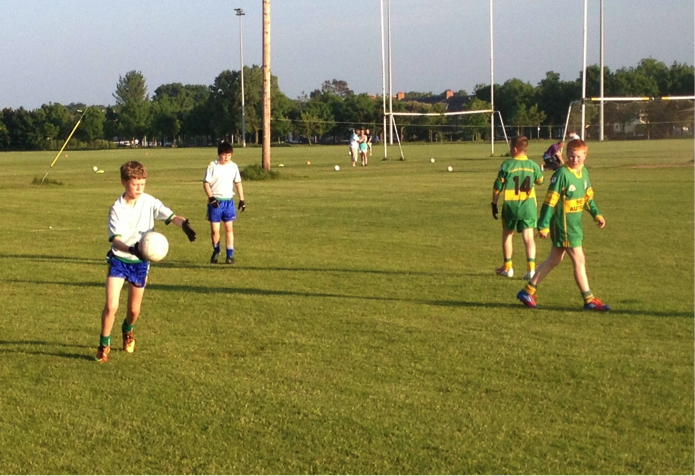 Winning can become a habit and a good won at that.  Winning has become the hallmark of this U-13 squad, their latest victory coming against St Margarets who made the trip to Sean Moore Park on a gloriously sunny Saturday afternoon.  After a somewhat hesitant start during which the visitors managed to run at our midfield and defence with too much ease, Clanns eventually caught up with the pace of the game.  And when they got their passing and distribution right, their play was a pleasure to the eye as well as to the scoreboard.  With both sides regularly turning on the style, the game produced a total of 28 scores, with Scott Collopy among others contributing well for the home team.

As is currently the case with hurling squad, normal numbers are depleted.  Into the breach stepped Conor Hennessy and Rory Tobin from the U-12s – both of whom made a massive contribution.  This latest win leaves Clanns well on top of their Division 5 league table. 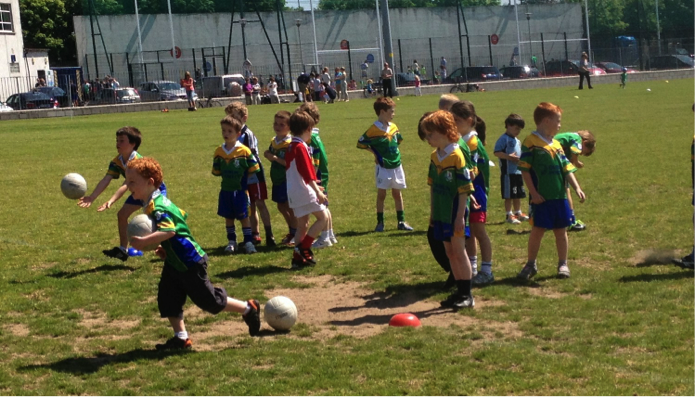