We are the Champions!

Our U-16 footballers did themselves and the Club proud in winning the ‘C’ Championship Final in Parnell Park last Saturday, doing so with considerable style and passion.  The lads had prepared well and were ready to take on a strong St Patrick’s side from Donabate.  Winning the toss, St Patrick’s opted to play with the wind (strong) in the first half and they took the lead with two well-taken points. Clanns started to work some chances and scored three points on the bounce (Ross).  The work rate of our midfield duo – Aran and Jonathan – was brilliant throughout the game.  This team has developed a habit of pushing on in the middle 10-minute period of each half; and sure enough on the 19th minute scored an amazing goal. In fairness to the opposition they stood up and scored a goal and point of their own to level the game at halftime at 1-3 apiece.  Clanns had played well against a strong wind and thus were confident going into the second half – especially after one of Colm Reynolds’s special team talks. 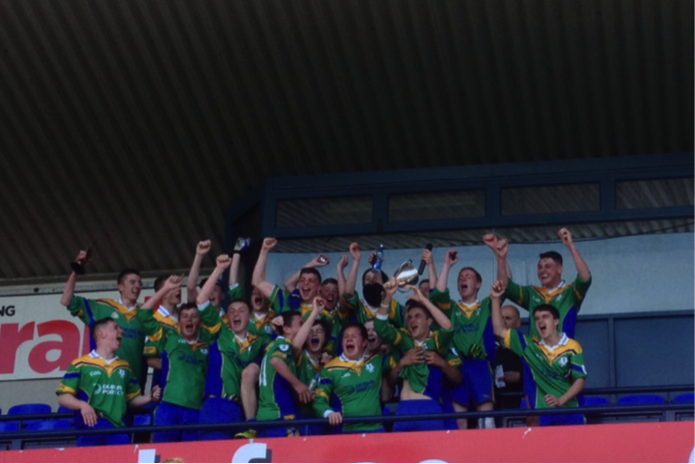 The second half kicked off with a well-worked score finished by Gary. This was followed by a further two points only for St Patrick’s to respond with a point and a goal. The match was truly in the balance and could have gone either way. Both sides were tiring and the game was bubbling up. Hats off to our defence of Theo, Sean, Sean R, Eric, David and Aaron (Monty) for the steel they showed throughout the game; while our half-forward line of Dean T, Tom G and Tomo W set the groundwork for a lot of our scores.  Then came the second Clanns goal, courtesy of Tomo who smashed into the net to send our supporters wild.  What followed was a great exhibition of football, both teams traded scores and with eight minutes to go the game was level once again at 2-7 each.  But our lead was restored and the smallest man on the pitch (Glen) scored a key point to provide a two-point advantage with just four minutes remaining.

Although St Patrick’s pushed hard to the very end, Clanns reached the final whistle with a three-point cushion and the players celebrated with the same passion they had displayed on the field.

A big thank you is due to the Clanns army of travelling supporters, to the coaches – Jonney and Colley – and to the players themselves of course.  And a very special mention must be made of Ray Walsh for all the work he has done with this team behind the scenes and who had faith in this bunch of players long before many others.  Take a bow Ray!

U-7 girls face the challenge well

On two recent consecutive Saturdays the U-7 girls ventured into the very exciting world of the “Challenge Match”. Their opponents in home and away fixtures were Cuala. The first leg was at home with an intention that each team of seven would play two matches each. However, wind, sheeting rain and frost bite created an emergency situation only capable of being salvaged by crisps and cans of coke in the dressing rooms after just one match each had been played. The return games took place in much more clement conditions in Dalkey and were a great success. Despite extensive investigation no record of the results of any of the matches could be found and “honourable draws” were declared. As well as better weather, Cuala provided much healthier after-match refreshments in the form of popcorn and juice! 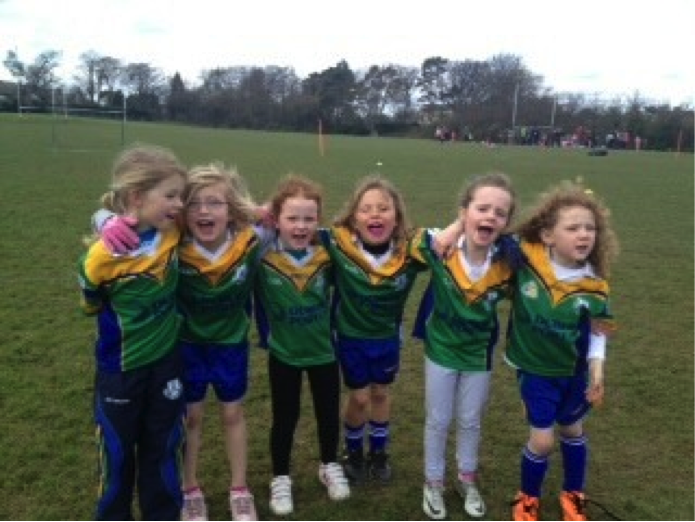 A happy bunch – whatever the result!

Whilst in the greater scheme of things, the results of the matches were unimportant, the two games had a great effect in terms of enthusing the girls – as well as their parents. Hopefully this can be the beginning of a long involvement with the club.

U-13 footballers on winning streak

The significance of the U-13 footballers’ win over Fingal Ravens lay more in the two league points gained than in the manner of the victory.  Despite fielding a near full-strength team of 15 plus substitutes, Clanns struggled badly to get into any decent rhythm for the most part of this home fixture.  Poor passing, loose tackling and misdirected kicks characterised much of the team’s play and it was sheer perseverance that enabled them to scrape home in the end.  In truth, the visitors played the better football for long spells of this game and, while both teams had to contend with wind and heavy rain through much of the second half, Fingal adapted much better to the conditions. 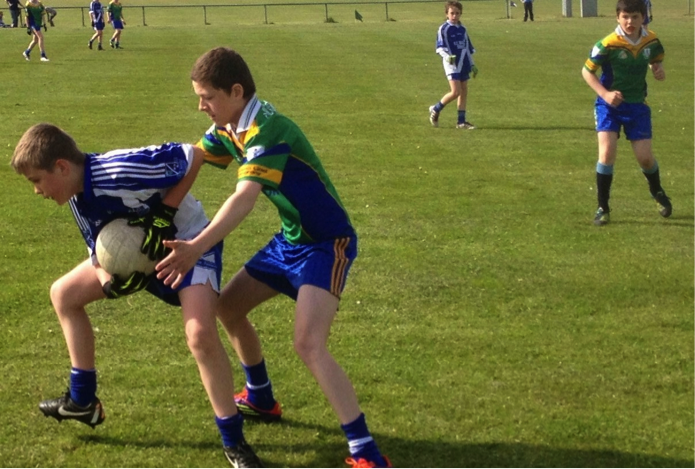 Among the few positive takeaways from this game from a Clanns point of view was the strong debut performance of Evan Downey at right-half back, which was topped by his scoring a crucial goal when he later played in the forwards.  But as is often said, a good team is one that wins even when they don’t play well.

If the Fingal game wasn’t the ‘prettiest’ of wins, the subsequent game away to St Anne’s in Tallaght turned out to be quite the opposite.  The first half was evenly contested with both sides playing some really good football.

he Clanns five-point lead at half time was largely down to the advantage of a favourable wind and a sloping pitch.  But against all the odds and the elements our lads upped their game even more in the second half to produce their best 30 minutes of football this year so far.  Not alone did they clock up further good scores, they kept the opposition to a single point to run out worthy winners – a great team performance.  That’s five wins out of five to date and a top of the table spot in Division 5.

A strong St Peregrines U-14 team raced into a 2-4 lead in the first 15 minutes of this encounter before the Clanns girls got warmed up.  But once they got going our girls showed true grit. Great determination from every one of the players saw them battle their way back to level terms with 10 minutes remaining   Clanns showed real character in this match – no heads dropped, no one gave up and everybody emptied the tank to give it their all.   On occasion Clans were unlucky not to score but they certainly should be very proud of their performance.  In the end it was Peregrines who bagged the crucial winning scores – despite an incredible late goal from Aisling (solo from half way and a might shot from distance!).  Next up is a home fixture against Parnells when another thriller can be expected.

By the time the girls came to their next fixture at home to Parnells they seemed to have managed a better start, so much so that they led 1-1 to 0-1 by half time,  However, unusually for this squad, they went flat in the second half and let the game slip away. 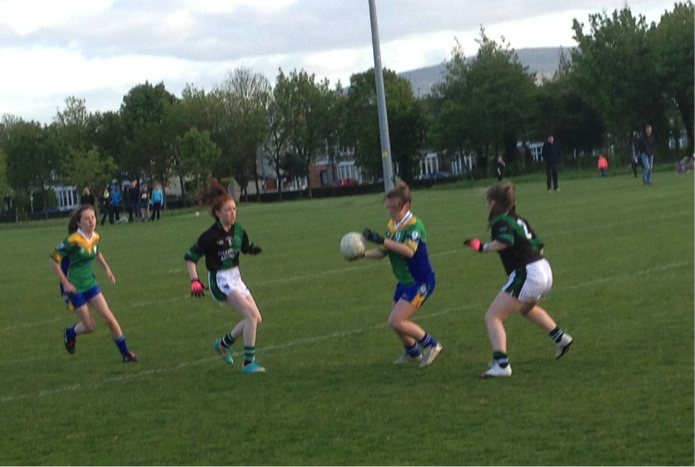 But they made amends in their most recent encounter, this time against Scoil Ui Chonaill.  In a high-scoring game the goals came from Amy O Hora (hat trick!), Amy Carroll and Cliodhna Duggan that marked a thrilling performance by the whole team. These girls have great determination as typified by Amy, Clare, Cliodhna and Shona all battling back from injury to play.
Clanna Gael Fontenoy 5-6  Scoil Ui Chonaill 4-0 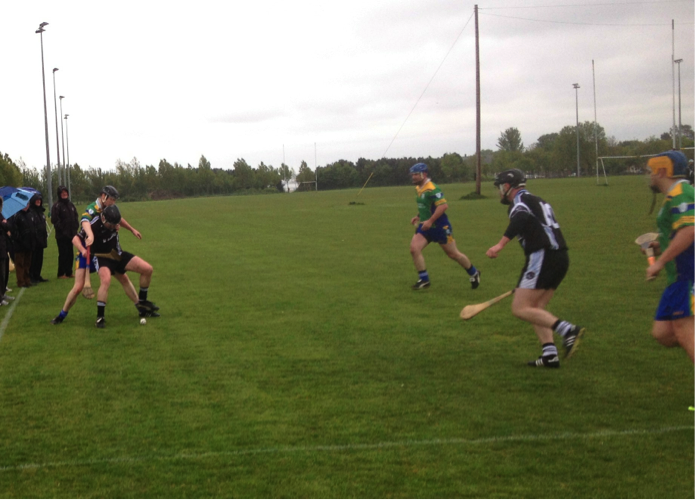 There was nothing separating the Clanns senior hurlers from the visiting St Peregrines team after their recent championship clash in Sean Moore Park.  While the lead changed hands a number of times during a pulsating game, neither side managed to gain a real advantage that could be secured such was the ebb and flow of the play.  For that matter, Clanns found themselves a few points behind as the game entered the final quarter, but they pulled themselves back into play and could have snatched the winning point from a number of good scoring opportunities right at the end.  Both teams served up some good passages of play.  But the score of the game came from Jonney Sadleir’s  targeted clearance from the full-back position to Niall O’Regan in midfield, who in turn found Cormac Connolly who shot a great point from a narrow angle.

U-12 Hurlers dig out another victory

The U-12 hurlers have shown great spirit in their last two matches, turning the tables on their opponents in the second half.  On Saturday they lined up against a fancied Castleknock 2 team in Sean Moore Park. The visitors started very well but our boys really battled to stay in the match against a stiff breeze. The team was supplemented by Michael Hennessy, Brian Barron, Peter Maher, Cian Morgan and Aidan Duffy from the U-11s (a big thanks lads!). Each and every one of them showed great skill and commitment.

At half time Castleknock led 3-0 to 1-0 but, with the wind and the fighting spirit of the boys, anything was possible in the second half. Sure enough they whittled down the lead and went ahead 3-5 to 4-0 with two minutes remaining. They then conceded an unlucky goal, putting them a point behind, before rallying again for Seamus McCann (2-2) scored a last minute goal. Aidan Duffy had a great display in goal and Conor Hennessy shored up the defence unselfishly with Niall Madill. Seamus McCann ran riot up front ably assisted by Oisin mcMahon and Karl Morgan(1-3) who controlled midfield with aplomb. However, he was outplayed by younger brother Cian who was a deserved man of the match.

Comprehensive victory for U-12 boys

The whole panel contributed to a comprehensive victory against St. Marks in Ringsend Park on a lovely summer’s evening. Clanns started energetically with Rory Tobin and Odhran Darcy dominating midfield and Jefffrey Woods sniping up front, ably assisted by Christopher Cosgrave. St. Marks were held scoreless and only scored two points from frees in the second half as Clanns continued to dominate. Louis Clarke was released from goal in the second half, adding muscle to the defence where Niall Madill and Ruairi Darcy also excelled. Jack Guinane (though ill) showed well up front in the second half. The boys played fast passing football but were at times let down by their point taking. A good steady win which keeps up the momentum for the League campaign with two big matches to come before the summer break!

Our Junior hurlers enjoyed a comfortable win over Faughs in the championship.  Ger Breathnach scored the goal of the game pulling on the ground from distance into the roof of the net.

A tough encounter for U-12 girls

What a day for a match, sun shining, great crowd of supporters to welcome our visitors, Erin Isle.   And what a tough match it proved to be.  Clanns started well, everyone was passing the ball and using the whole pitch.  And the goal keeper provided some great kick outs.  Unfortunately, our opponents were more consistent throughout the match, helped by a couple of early goals which seemed to knock our girls off their rhythm somewhat; and they themselves missed a few opportunities for goal – that’s the nature of the game.

Clanns seemed to run out of steam in the second half – maybe the weather or the 5K charity cycle they had participated in earlier) and the Erin Isle girls just kept going.  Though our girls played their hearts out, it wasn’t meant to be their day.

Any cookies that may not be particularly necessary for the website to function and is used specifically to collect user personal data via analytics, ads, other embedded contents are termed as non-necessary cookies. It is mandatory to procure user consent prior to running these cookies on your website.