Home » About the Club 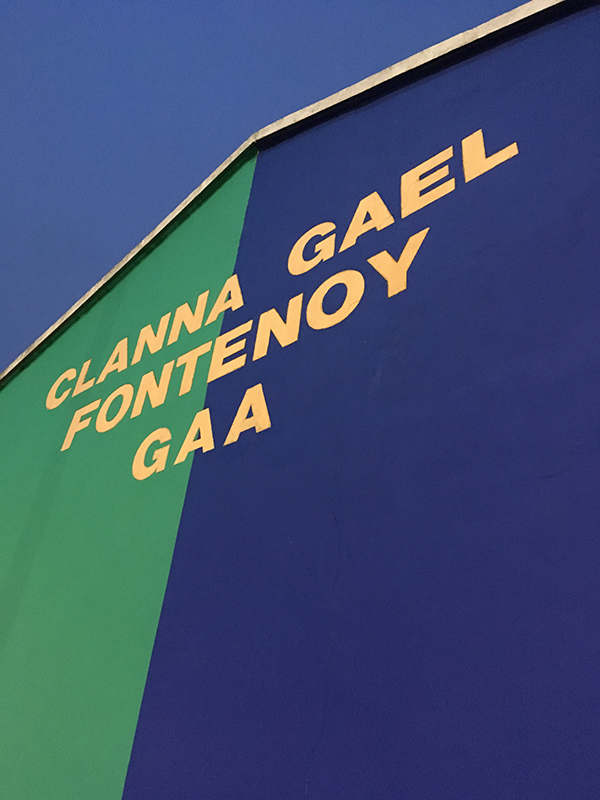 Historically the club evolved from various GAA clubs in the locality – see Club History. Most recently in 1968 it was formed through the amalgamation of the Fontenoys (founded in 1892) and Clanna Gael (founded in 1929). Our club colours are blue, green, gold and white. After operating out of Ringsend Park for many years we moved to our current location in Sean Moore Park in 1988 and continue to also use the Ringsend pitches.

As with most GAA Clubs, geographical proximity is a significant determinant of the membership and attractiveness of our club. Our catchment area stretches from the inner city out to the inner suburbs, embracing areas such as Dublin Docklands, Ringsend, Irishtown, Sandymount, Ballsbridge, Donnybrook and parts of Dublin 6.

We have over 700 registered members and we field close on 50 teams to compete in football, hurling and camogie at both juvenile and adult levels. In addition, we have a vibrant nursery academy which caters for boys and girls up to the age of six.

History shows that quite a number of clubs played gaelic games in our area at one time or another before eventually evolving into the Clanna Gael Fontenoy club as we know it today.

The name Fontenoy itself comes from a small town in Belgium. It was scene of a battle on the 11th May 1745 and was part of the War of the Austrian Succession between the French on the one hand and the British and Dutch on the other. The latter were assured of victory, or so it seemed, until the Irish Brigade – fighting for the French – made one last charge. To the cry of ‘Remember Limerick’ – a reference to the long defence of Limerick from the Williamites – the Irish Brigade, led by Lord Clare, Charles O’Brien, routed the British and Dutch forces and won the day.  The Celtic Cross Memorial erected at Fontenoy by nationalists was unveiled there by the Lord Mayor of Dublin on 25th August 1907.

There is a record of a notice from the Secretary for all members to be at ‘Fontenoy Hall, Bath Avenue, Monday 18th March 1888 for the first production of The Harvest Storm with grand variety, songs, dances, recitations, etc.’

The first reports on Fontenoys as a hurling club actually don’t appear until 1901 when the ‘Freeman’s Journal’ states: ‘Fontenoys Hurling Club, Sandymount – All members are requested to meet on their practice grounds at Londonbridge Road, next Sunday morning, 10th ins., to play friendly with Metropolitan H.C. at 10.30 sharp.’  From the Dublin County Board minutes of that time Mr James Mullaney, of 4 Rosemount Terrace, Londonbridge Road, Sandymount affiliated Fontenoy as a Hurling club.

It is noted for the first time that Fontenoys are using Ringsend Park for training on No 5 pitch and the first fixture fixed for this venue is 14th May, 1910.

From 1900 until 1910 prominent names in the Fontenoys lineout were Behan, Boggan, Campion, Connor, Cullen Donohue, Dunne, Flanagan, Halton, Kiernan, Mullany, McCormack, Quigley, Rossiter, Ryan, Treacy, Tully, Finn, Ryan, Quinn McCann, Bissett and Tobin.  In 1914 the first reference to the famous Fletcher family is made when Josh lines out for the team against Collegians in Croke Park.

Most recently in 1968 Clanna Gael Fontenoy was formed through the amalgamation of the Fontenoys (founded in 1892) and Clanna Gael (founded in 1929). After operating out of Ringsend Park for many years we moved to our current location in Sean Moore Park in 1988 but also continue to use the pitches in Ringsend Park.

Here is a listing of the various GAA clubs, apart from Fontenoys and Clanna Gael, which operated in this area at various times in the past:

The following is a resume of the history of a number of these clubs.

Brother Sheares GFC
Founded in the Baggot Street area in 1887 and named to commemorate the brothers executed for their role in 1798. James Cunningham, 9 Pembroke Road was first captain and secretary. In 1894 Brothers Sheares was unable to field a team but a year later they were revived with James Geraghty, 11 Grants Row as secretary. The Club was disbanded about 1898.

Desmond GFC
This side from Donnybrook competed at Junior level in the early 1920s and had several of the Darcy family on the team.

Ed Grays GFC
In 1886 a GAA club was established in the Merrion area and named after Edmund Dwyer Gray, the journalist and nationalist politician. The Club’s first secretary was William Horgan of 1 Eden Terrace, Merrion Rd and the captain was J Walsh.  In 1887, E.D. Gray’s lineout against Parnells (Thomas St) included McLoughlin, Dowdall, Squires, Costigan, P. Ryan, H. Nolan, Cullen and McGuinness. In August 1888 a hurling side was started in the club with Michael O’Grady of Merrion House the organiser.  When the E.D. Grays footballers travelled to Blessington in the same year to play the local ‘98 club side, the match was witnessed by several thousand spectators. E.D. Grays disappeared from the scene at the time of the ‘Parnell Split’.

Erins Isle G.F.C.
This minor football club from the Ringsend district was founded in the early 1900s. Thomas Condron, 30 Irishtown Road was recorded as club secretary in March 1904. It had no connection with the later club of the same name founded in Finglas.

In 1917 captained by Bob Mockler, the Faughs and Dublin inter-county hurler, McCrackens won the Intermediate football championship. Jim ‘Builder’ Walsh and Ned Tobin, two other prominent hurlers with Faughs and Dublin, also played with McCrackens.  The brothers Joe, Peter and Hugh Stynes played with the Ballsbridge side in the early 1920s before they moved to O’Tooles. Joe Stynes was the star forward of Dublin’s 1923 all-Ireland winning side. The McCrackens disbanded in the late 1920s.

Hillside GAC
This short lived Club, based in the Westland Row district, was founded at a meeting held in 4 Sandwith Street in January 1893.

Inisfaels
In the early years of the 20th century two teams named Inishfael, a poetic name for Ireland, competed in the Dublin league; one, which still survives, was from Balgriffin whereas the city club of the same name based in Leeson St-Pembroke St district had a short life.  Henry Brierton of 21 Leeson Place was the secretary and also a player. Other mebers included M. Doyle, B. Doyle, P. Doyle, E. Dunne and D. Quinn.

Kevin Barry G.F.C.
Shortly after the execution of Kevin Barry in November 1920 a junior football club commemorating his memory was founded by Martin Kelly of 115 Haddington Road. It folded soon after.

Michael Dwyer G.F.C.
This juvenile football club was formed in Ringsend in 1891 with Tom Knott of Bath Street as club secretary.

Shamrocks G.F.C.
The Shamrock club was founded in 1887 in the Denzille (Fenian) Street district where it had a clubroom. Martin Masterson was secretary. John Coakley and Pierce Ryan were delegates to the County Committee in 1888. Prominent players included, J. Williams (captain) Kennedy, Daly, Coffey, Rice, Costello, Maher and Dan Holland. Shamrocks failed to survive the Parnell split.